CSOs TRAINING ON GENDER AND SDGs

Home/CSOs TRAINING ON GENDER AND SDGs 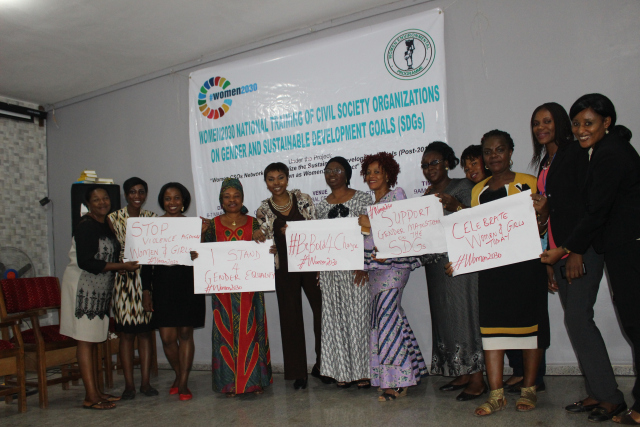 Congratulations to all women all over the world as we mark the 2017 International
Women’s Day!

Every 8 of March is celebrated around the world as International Women’s Day, to recognize the achievements made by women in political, economic and social development of the society at all levels, ranging from the family, community, subnational, national and global levels.

This Day is also meant to drive home the need for inclusion of women in all decisions and development processes at all levels owing to the important role they play in the development of any society.

The 2017 theme for International Women’s Day is “#BeBoldForChange”.

The important role women play in development of the society has been recognized
by the United Nations as they are “Convinced that the full and complete development of a country, the welfare of the world and the cause of peace require the maximum participation of women on equal terms with men in all fields…,” hence the establishment of the Convention on Elimination of All Forms of Discrimination Against Women (CEDAW) in 1979, to promote women’s participation in all decisions affecting them, to empower women and remove all obstacles (cultural, religious, social, economic and political) affecting their participation in crucial issues.

The CEDAW was established after several United Nations instruments that were meant to promote gender equality, advance the rights of women and eliminate discriminations against them (instruments such as the UN Charter, Universal Declaration of Human Rights amongst others) failed. This was noted by the United Nations in the opening text to the CEDAW: “…Concerned however that despite these various instruments, extensive discrimination against women continues to exist.”

Further to the CEDAW came the Beijing Declaration and Platform for Action in 1995 whose aim was to ensure gender equality and empowerment of all women, everywhere.

All these efforts to promote gender equality, empower women and eliminate all forms of discrimination against them by the United Nations since 1948, when the Universal Human Rights Declaration was proclaimed in Paris, to the establishment of CEDAW, to the Beijing Declaration and Platform for Action, has not changed anything much concerning representation of women in critical decisions and development.

While some stakeholders are of the view that the International Women’s Day is not worth celebrating, others are of the opinion that the little changes that have been recorded as a result of these efforts should be celebrated while at the same time making more demands on the governments everywhere to implement policies, programs and projects that promote gender equality and women empowerment.

With the adoption of the new global development agenda, the Sustainable Development Goals (SDGs) and the Paris Climate Agreement, the International Women’s Day presents an opportunity to women all over the world to demand effective implementation of these agenda.

The training which focused on SDGs and gender, equipped the CSOs with the skills to monitor the implementation of the SDGs and ensure that gender issues are mainstreamed in all the national development plans.

Participants who were drawn from the six geopolitical zones of the country were elated at this opportunity to celebrate this year’s International Women’s Day in this way. They all joined their voices to demand for gender equality.